Despite being named for the Lee family (before Robert E. Lee was born), Leesburg’s Civil War history is a bit more “mixed” than one might think.  Yes, it was decidedly pro-Southern throughout the war, but not necessarily pro-secessionist.  Its two delegates to the April 1861 Virginia secession convention voted “no,” but in the referendum on secession in May, the vote in favor was 400-22.

We don’t know how Robert E. Lee, who accepted a commission in the Confederate army before Virginia became part of the Confederacy through that referendum, voted.  He had always said he opposed secession, so perhaps he would have voted “no”?  (If any reader knows the answer to that question, i.e. when and if Lee ever said how he voted, the Civil War community would appreciate your letting us know).

Leesburg changed hands some 150 times during the war, so it was both a Union and Confederate city many times.  However, its sympathies tended toward the South.  As one Union soldier commented as the Union took the town in March 1862, the people were “a perfect sneering next of rebels…the bitterest in their hatred of Northern mudsills of any we had met.”

Leesburg’s Courthouse Square has the inevitable monument to the Confederate dead (none for the Union!), but it is now also populated by memorials to World Wars I and II and the Revolutionary War.

A few blocks from the square is the retirement home of Virginian General George Marshall, now a National Historic Landmark.  Marshall was one of the leaders of the “Greatest Generation” as both World War II Army Chief and Secretary of State.  Interestingly, there is a painting of Robert E. Lee prominently displayed on the wall of Marshall’s house. 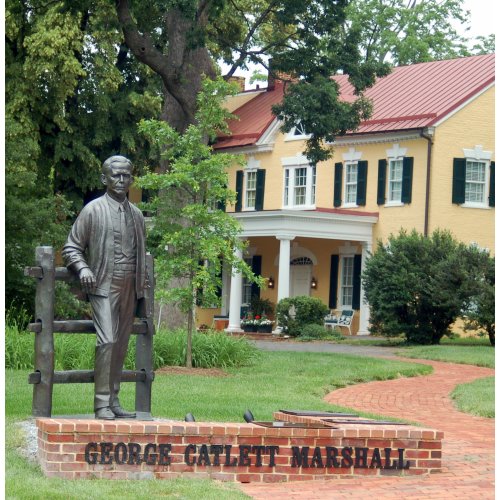