Here is a link to my article on Cox in the Essential Civil War Curriculum: 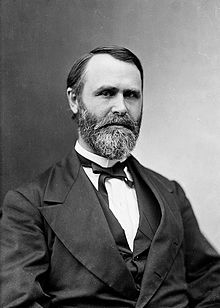 Here is the first, summary paragraph from this site, which I have edited for accuracy.  Note that my book is referenced as the key source for Cox’s life:

Jacob Dolson Cox, (Jr.) (October 27, 1828 – August 4, 1900) was a statesman, lawyer, Union Army general during the American Civil War, and later a Republican politician from Ohio. He served as the 28th Governor of Ohio and as United States Secretary of the Interior. As Governor of Ohio, Cox sided for a time with President Andrew Johnson‘s Reconstruction plan and was against African American suffrage in the South, though he supported it in Ohio.[1] Seeing himself caught between Johnson and the Radical Republicans, Cox decided not to run for reelection. He stayed out of politics for a year, though both Sherman and Grant advocated that Cox replace Stanton as Secretary of War as a means of stemming the demands for Johnson’s impeachment. But Johnson declined. When Ulysses S. Grant became President he nominated Cox Secretary of Interior and Cox immediately accepted. Secretary of Interior Cox implemented the first civil service reform in a federal government department, including examinations for most clerks. Grant initially supported Cox and civil service reform, creating America’s first Civil Service Commission. However, Cox was opposed by Republican Party managers, who ultimately convinced Grant to cease civil service reforms. President Grant and Secretary Cox were at odds over the fraudulent McGarahan Claims and the Dominican Republic annexation treaty.[2] Secretary Cox advocated a lasting, honest, and comprehensive Indian policy legislated by Congress after the Piegan Indian massacre. Cox resigned as Secretary of Interior having been unable to gain Grant’s support over civil service reform. Although Cox was a reformer, Grant had believed Cox had overstepped his authority as Secretary of Interior and had undermined his authority as President. In 1872 Cox joined the Liberal Republicans in opposition to Grant’s renomination. In 1876 Cox returned to politics and was elected to and served one term as United States Congressman of Ohio. Congressman Cox supported President Hayes’s reform efforts, but his term as Congressman was unsuccessful at establishing permanent Civil Service reform.[2] Cox retired and did not return to active politics, using his time to write several books on Civil War campaigns which remain today respected histories and memoirs.