Staying at home for these two months has allowed me  time to work on a couple of projects involving both short bios of fascinating Civil War personages and the wonderful pictures available on the Library of Congress web-site, loc.gov.

The first book, which I hope to have published on amazon.com soon, is entitled, CIVIL WAR TRAILBLAZERS AND TROUBLEMAKERS.

Over the next couple of days I will post either a picture or a short description of one of these people and then will let you, my good readers, see if you know who they are.

But first, and this is likely the easiest task you will have, here is the proposed cover of the book with pictures of nine of the personages.  First one to name all nine will get the award as the most knowledgeable Civil War buff of all!

I had the same reaction to “Grant” as I did to the movie “Lincoln” a few years ago. Both were/are excellent productions which needed about three more hours and a few fact-checkers to improve the product. But given the limits of time and, sadly, commercials, what they created was among the best Civil War products I have seen.

For those who will “nit pick” the errors and compression of history, I say you are right, but so what? I too thought the last episode was trying to do too much, and I agree that it was a bit hagiographic. But considering the dearth of good Civil War productions in general, we should be thankful for ones like this that achieve so much. Perfect? Not by a long shot. Excellent? Yes, for the most part. Very Good? I think that’s my grade.

We took a break today from our isolation to make our first trip over the Potomac River between Virginia and Maryland using Whites Ferry.  The Virginia side is located just outside Leesburg, VA, and a ferry has been operating in the general area since 1817.  This is the last operating ferry on the river between the two states.

Soon after the Civil War a Confederate officer named Elijah White (thus the name) purchased the boat then operating and named it after his former commander Jubal Early.  The current owners have purchased two boats over the years for the operation, each time naming it after Early because, they say, of that general’s “rebellious, no surrender attitude.”  (I guess someone forgot to tell them that Early had surrendered, but oh well).

About a mile north, at White’s Ford, Robert E. Lee and his Army of Northern Virginia forded the Potomac in early September 1862 to begin the Maryland campaign.

Below are pictures of the current boat, and placards describing Whites Ferry and Whites Ford. 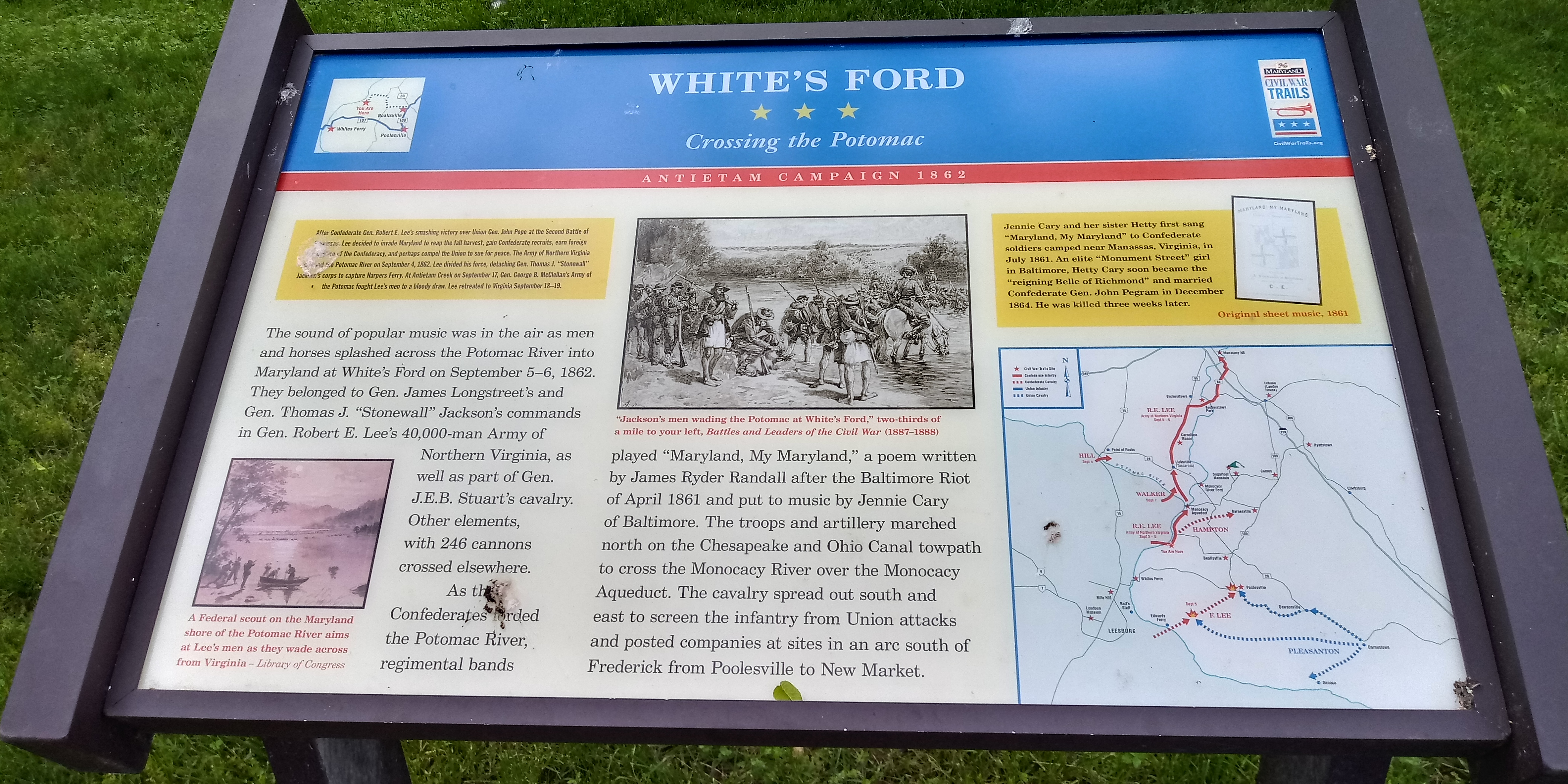 While reading accounts about Major League baseball returning soon, I happened upon a political cartoon about the 1860 election depicting the four candidates playing a variety of baseball.  Lincoln is the one with his foot on home plate, and he is saying to the others, “Gentlemen, if any of you should ever take a hand in another match at this game, remember that you must have ‘a good bat’ and strike ‘a fair ball’ to make a ‘clean score’ & a ‘home run.'”  John Bell complains about a ‘foul ball;” Stephen Douglas says he had hoped a fusion ticket would be a “short stop” to Lincoln’s career; and John Breckinridge says that it appears that the other candidates are “skunk’d.”  The players’ bats and belts have political labels on them — Lincoln’s “bat” is actually a wooden rail labeled “Equal Rights and Free Territory.”

After viewing this element of the “history of baseball,” I checked for information about the formerly-credited creator of baseball, General Abner Doubleday.  As we now know, Doubleday never knew, during his lifetime, that he had invented baseball, probably because he didn’t.  I did find interesting his carte de visite photo, below, on which either he or someone he trusted wrote the following tribute and bellicose message, “Doubleday, who fired the the first Gun, with the determination, that Traitors to the Stars & Stripes – must & shall be put down, trodden, if need be into dust.”

While we wait for real baseball to resume, these images will have to suffice. Enjoy!

“The Battle of Aldie” is not a major event in any Civil War list.  But the monument there to the 1st Massachusetts Cavalry, erected in 1888, was the first commemorating the action of Union forces constructed south of the Mason-Dixon line after the Civil War.

We visited the small site in Aldie, Virginia (about 20 miles from Manassas) a few days ago during one of our “escape the pandemic, go for a drive in the country” escapades.  It seems that Confederate cavalry commander General JEB Stuart and his  men were shielding Lee’s movement north toward Pennsylvania on June 17, 1863.  They were spotted by forces commanded Judson “Kill Cavalry” Kilpatrick, and several hours of fighting ensued.

The 1st Massachusetts suffered significant casualties, and survivors and families gained agreement from the town to erect a small monument there.  An explanatory placard is nearby.   Below are images of the placard and the monument.

RE-FIGHTING THE CIVIL WAR?  FROM MY MUSINGS TO YOURS!

My book, Civil War Musings and Reflections: Blogging about the “American Iliad,”   is now available for pre-order as an e-book at my amazon.com author’s page, along with my other books.  The paperback version should be available in a few days.

Utilizing our enforced stay-at-home existence, I organized in the book many of my blogs about the war into a variety of themes.  But the first item, about the issue of what to do about Confederate monuments, sets the overall theme.  It is an appeal for the Civil War community to find common ground.  It uses as an example the people of Franklin, Tennessee, who , while not removing the statue of a Confederate soldier on their public square, agreed on placing a variety of plaques there which explain and “contextualize” (the new term for such actions) what happened there during the war.

Other items range from discussing strategy and tactics to the role of pets for the Civil War soldier.  All of them are designed to make the reader muse and reflect, just as I have.  Enjoy!

Virginia Governor Ralph Northam signed two pieces of legislation this past weekend which will inevitably precipitate even more controversy over what to do with Confederate monuments.  One law gives authorities the power to decide to “remove, relocate, or contextualize” those monuments.  Another creates a commission to recommend a replacement for Robert E. Lee’s statue in Statuary Hall in the U.S. Capitol building.   The laws will reportedly go into effect on July 1.

Given the events of recent days, especially in Charlottesville, Virginia, I fear that those on the extremes of this issue will dominate the debate and the reaction to these new laws, with the potential for violence.  That’s why I very much hope the Civil war community will very strongly support the option of “contextualization.”  I fully realize that compromise and conciliation have not always fared well in this particular debate, but that doesn’t make it any less right or necessary.

I recently blogged here about the actions of the community in Franklin, Tennessee to contextualize the Battle of Franklin, November 30, 1864 as a worthwhile example to follow.   After many months of discussion and debate, the city placed several descriptive signs around the public square, which until recently had only seen a statue of a Confederate soldier.  The new signs describe, among other things, the formation of the U.S. Colored Troops and Reconstruction.  As a result, the context of the battle in the Franklin public square is more balanced and broad-based; no monuments were removed or replaced; and there was no violence because reasonable men and women found common ground.

Here are some images of the public square and two of the new signs.

In April 1864, as Jacob Cox and the Army of the Ohio finalized preparations for the “Atlanta Campaign” in eastern Tennessee, he and his staff had an Easter feast which, to them, was far better than their usual fare.  Maybe we can try it out tomorrow?

Cox described the feast he and his staff enjoyed in a letter to his wife on April 16, 1864:

Yesterday we were gladdened by the arrival of an agent of the Sanitary Commission who brought us some onions, potatoes, & sour kraut ‑ & never were vegetables more wanted or better appreciated.  A good deal of scurvy has been manifested in the incipient stages among our men, & all of us were feeling the need of some change of diet.   For sometime we have had nothing but bacon & flour with occasionally a little rice or white beans.  And as we cannot get flour made into anything but heavy biscuit which I abominate, you may be sure I have not had much luxury in victuals at any rate.

Here is an image of what that table might have looked like (minus, of course, the wine, since Cox was an avid teetotaler):

I recently became aware of a picture of General Jacob D. Cox and his staff, apparently from early 1863.  The picture is from a framed photo and appeared on an internet search.

It was taken at an odd time for Cox.  He was then stationed in Marietta, Ohio, in winter quarters, just after having re-taken West Virginia for the Union (just before it was to become a new state in 1863).  He had earned a second star as a Major General after sterling service in the Maryland campaign, and he was waiting to hear about returning to the main arenas of the war.  But after his two main supporters, McClellan and Burnside, were fired, his chances for a new assignment diminished.  Then in March 1863 he lost his second star when his name was removed from the Senate list.

This too makes the picture interesting because he is pictured with the two stars of a Major General.    The picture also contains the first photo I have found of his brother, Theodore, who was one of his aides.  (He is at the bottom left as you look at the picture).

All in all, a good find.  Oh, and thanks to internet friend Justin Mays for helping me to identify the source of the photo and the men in it.

Recently, I asked on Facebook about the salaries earned by Civil War soldiers, and those who responded pointed to this source: Albert A. Nofi’s book, A Civil War Treasury, Being a Miscellany of Arms & artillery, Facts & Figures, Legends & Lore, Muses & Minstrels, Personalities & People.

That’s quite a title, but it is a deliberate attempt to mirror the kind of 19th century books which contained an endless variety of facts and information.   It really is a wonderful miscellany, and I have found countless gems of information about innumerable topics.  For example, what the men ate, what is a vivandiere, how  many immigrants served on each side and where they were from, etc. etc.

Originally published in 1992, it is available on amazon.com used for very little.  But its value is very great — highly recommended.