A few hundred yards from my house in Gainesville, VA, there is an obscure and hidden Civil War “monument” which is likely among the least visited in Virginia.  The three foot high red sandstone edifice has a bronze plaque stating that Lee, Longstreet, and Jackson met there at 12:30 PM on August 29, 1862, just as the Battle of Second Manassas was unfolding.

The monument was erected in 1917 by the Haymarket (VA) Agricultural Club.  Because it was visible at the side of State Route 29 just a few hundred yards from the edge of the battlefield, it was an important tourist site.  However, when the road was widened, the monument was in the median.  That and several car accidents convinced officials to move it in 1985 to a safer — but quite obscure — place inside the neighboring Conway Robinson State Forest.

The monument can still be seen from Route 29, but only if you know it’s there.  Plus there is no place to park.  I’ve driven by this part of “my backyard” hundreds of times, and have never seen anyone visiting the monument.   Now you readers can at least give it a look. 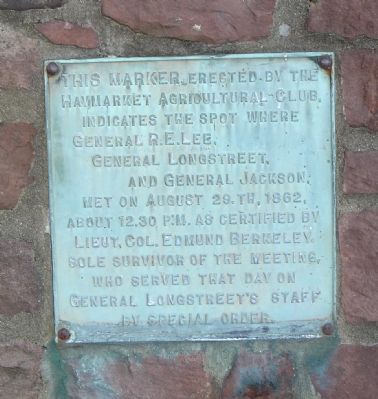