As we near the 154th anniversary of the fall of Atlanta in the Civil War, I thought readers might enjoy a vignette about how a misjudgment by Confederate commander John Bell Hood and an embarrassing episode for Union General Jacob Cox helped pave the way for the Union triumph.

Having besieged Atlanta in late July/early August, Union commander William T. Sherman “was now convinced that he could expect no permanent results from cutting the enemy’s communications (and supply line) unless it were done in force.” So Sherman ordered a comprehensive flanking maneuver, entrenching the 20th AC to the north of the city and swinging the rest toward its south. Cox’s division was to be the “pivot of the movement,” and by August 27 “most of the army was between Atlanta and Sandtown.” In his diary on August 26 Cox noted, “The enemy is excited and watches to see what this means, but does not interfere.”

Sherman had not intended this effort as a subterfuge, but it became one when Hood concluded that Sherman was retreating via the Sandtown road because his earlier effort to cut the Union supply line to Chattanooga had succeeded. Hood’s Chief of Staff wrote in his journal August 26, “The prevailing impression is that the Federals are falling back across the Chattahoochee River.” Hood’s communiqués of August 25 and 26 included a report that his cavalry had captured 1000 head of cattle and that Sherman seemed to have “disappeared.”

An incident on August 27 in which Cox was allegedly involved was, by some accounts, critical to convincing Hood that Sherman had indeed retreated. According to W.J. Hardee, one of Hood’s subordinates, who related the story to Cox after the war, a female spy told him that she had been within Schofield’s lines on August 18 and had asked for food. She said she had met personally with Cox, who refused her request and even told her that he and his men had been “living on short rations for seven days, and now that your people have torn up our railroad and stolen our beef cattle, we must live a damn sight shorter.”

Cox, who neither drank, smoke, nor cursed, wrote in his memoirs that that he didn’t remember the incident, blushingly adding that “a laugh was raised at my expense as Hardee in telling the story repeated some profane camp expletives as having added emphasis to the refusal… [Cox’s commander General John] Schofield merrily rallied me on a change of habits of speech when not with my usual associates, and refused to credit my protestation.” Hardee said he had taken the woman to Hood to tell him her story, and in response “Hood exclaimed, ‘There, Hardee! It proves that it is just as I told you. Wheeler has broken Sherman’s communications; he is short of provisions and is retreating north by the Sandtown road…To this conviction he stubbornly adhered for forty-eight hours longer.”

On August 31 the flanking movement by Cox’s men allowed them to destroy the Macon and Western Railroad tracks south of Atlanta.  When Hood heard of this, he ordered the abandonment of the city the next day.  He also ordered the destruction of supplies, including armaments, which led to the first “burning of Atlanta” (at least in part). 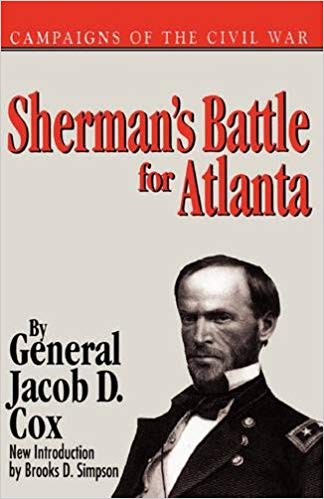