In his memoirs Jacob Cox dealt with a wide variety of issues relating to the war, from strategy and tactics to the death of one of his children and the rivalries between West Pointers and Political Generals.  He also wrote about diversions from the tensions of fighting, including pets in the army and how they were treated.  Here is his story about his own pet and how it met a most unexpected end.

He wrote that many men in the ranks had pets, mostly dogs.  During the Atlanta campaign Cox acquired his own pet, a small “green and gold lizard,” which he found one day “residing” in his field desk.  (A picture of the desk, now placed in the Carter House at the Battle of Franklin facilities thanks to a Cox family gift, is below).  He did his best not to scare the lizard, and eventually he tamed it.  He wrote, “the little thing seemed to become fond of me, running about on my papers, clinging to my arm.”  Whenever Cox rode, the lizard sat on his hat rim, “like a most gorgeous aigrette.”  Cox joked that his men called the beast “an attache’ of the staff.”  One day when Cox was consulting with a colleague from another corps, however, one of the latter’s staff, seeing the lizard on Cox’s shoulder, knocked it off and killed it, thinking he had saved Cox’s life.  When Cox’s staff told the man that he had “killed the general’s pet,” he “slunk away, the picture of shame and remorse.”  Cox concluded, “Pets were sacred by the law of the camp, and he felt and looked as if he were a murderer.” 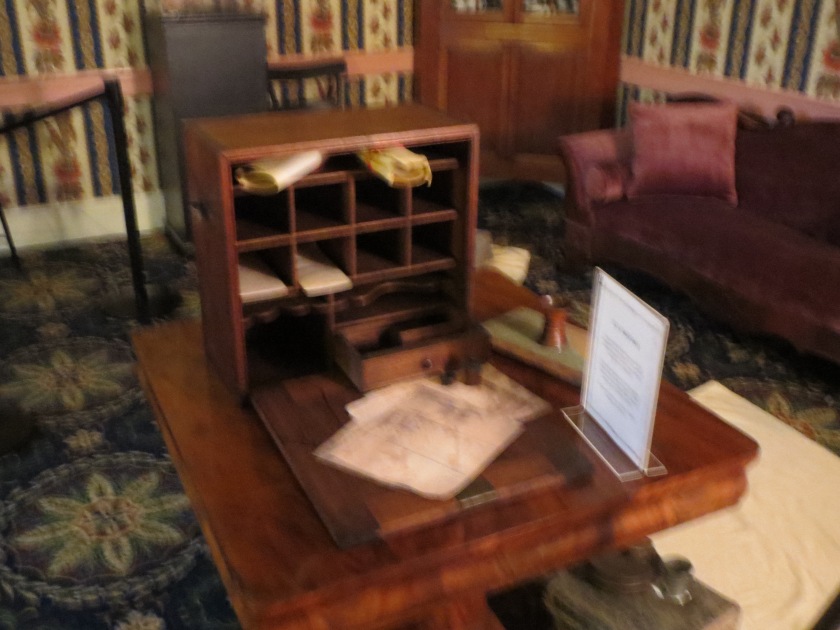