During the Civil War, Holmes County, Ohio (60 miles south of Cleveland) supplied many soldiers for the Union effort.  The residents there also created one of the more unusual internal conflicts when, in 1863, a thousand men resisted conscription.  When federal troops fired on their encampment, most of the men fled — and were ultimately conscripted.  Attached below is a placard describing the events at the aptly-named “Fort Fizzle.”

As is the case in many counties in Ohio, on the town square in Millersburg, the county seat, there is a monument which has a Union Civil War private atop it.  But clearly the Holmes county residents were more frugal than most.   As can be seen from these pictures, the monument covers the contributions of county residents to four wars, not just one!  It has the names Washington,  Jackson, Scott, and Grant on it, and above each name is an inscription noting that Holmes county men served in the Revolutionary, Indian, Mexican, and Civil Wars.   I’d be interested to know if this frugal, efficient approach was used on other town squares. 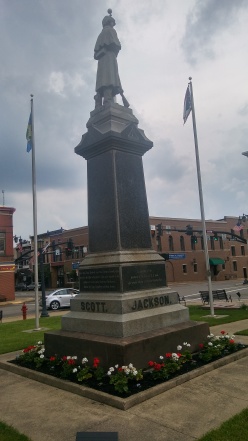 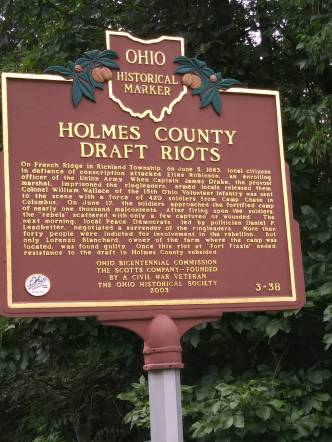 Author of "Citizen-General: Jacob Dolson Cox and the Civil War Era," and of the upcoming "Lincoln, Antietam, and a Northern Lost Cause." View all posts by geneofva

How to Buy My Books — All of my books — “Ohio Heroes of the Battle of Franklin,” “Lincoln, Antietam and a Northern Lost Cause” and “Citizen-General: Jacob Dolson Cox and the Civil War Era” are available via amazon.com. (see left). If you want To get a signed copy, e-mail me at geneofva@gmail.com